I am not big on war films, but went to see “1917” and I LOVED it. For me it is just a story told in beautifully-filmed images. I said “just a story”, but it is all but “just”. It is a riveting story, told in a poetic, picturesque way.  From the opening scene, I knew that the relationship between the two main characters was special. There was not a moment in the film where my interest would waver. I knew something was going to happen, but what?

Sam Mendes is a pictorial master. An abandoned doll, hacked cherry blossom, a ruined town in yellowish-amber light. Single images and symbols showing the cruelty of war. Why kill the cherry trees? Senselessness of war shown in one image, much more powerful than the graphic scenes of injuries. It reminded me of the poem “Song of porcelain” by the Polish poet, Czesław Miłosz. “Rose-colored cup and saucer…you lie beside the river where an armored column passes…Of all things broken and lost, porcelain troubles me most”. (see below) 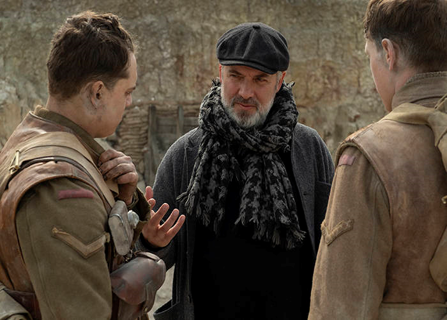 Special effects in the film are impressive – some are straight from the James Bond movie. Historical accuracy was not always adhered to. I was not hooked by explosions or the types of bayonets used in World War One. I followed the story in still images. 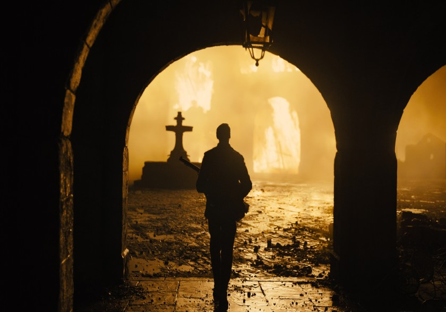 The scene where Will has to leave the only female (apart from the baby) character behind, does not bode well. We know there are drunk German soldiers nearby, but Schofield has a duty to do…

Another poignant scene was when William put the photo of Tom’s family on his body. It shows the importance of mothers – many of the soldiers were so young, they did not have girlfriends, hence it was the mother who they had in their hearts.

Music is mesmerising. Another picture, when soldiers are listening to a song, which though not a rousing piece, but a gentle and melancholic one, “wakes” the  men up to a battle.  It wakes the shell-shocked Will to action. This scene is universal. Polish classic literature has at least two famous “songs” when the lulled, tired and apathetic people are encouraged to fight for their independence (“Wesele”, “Konrad Wallenrod”).

It’s so good that films like this are made. Teachers will have so many opportunities to use it for teaching symbolism, inference and poetry.

Rose-colored cup and saucer,
Flowery demitasses:
You lie beside the river
Where an armored column passes.
Winds from across the meadow
Sprinkle the banks with down;
A torn apple tree’s shadow
Falls on the muddy path;
The ground everywhere is strewn
With bits of brittle froth–
Of all things broken and lost
Porcelain troubles me most.

Before the first red tones
Begin to warm the sky
The earth wakes up, and moans.
It is the small sad cry
Of cups and saucers cracking,
The masters’ precious dream
Of roses, of mowers raking,
And shepherds on the lawn.
The black underground stream
Swallows the frozen swan.
This morning, as I walked past,
The porcelain troubled me most.

The blackened plain spreads out
To where the horizon blurs
In a litter of handle and spout,
A lively pulp that stirs
And crunches under my feet.
Pretty useless foam:
Your stained colors are sweet,
Splattered in dirty waves
Flecking the fresh black loam
In the mounds of these new graves.
In sorrow and pain and cost,
Sir, porcelain troubles me most.

Posted by Gosia Bates on 2 February 2020