I have always remembered a Polish actress, who, after having spent a short time in America, appeared on the national Polish television. She spoke with a very prominent American accent, could not find Polish words, was hesitant and used a lot of pauses and non-lexical  fillers like hmmm, ah, eh. Ok, she was an actress, so maybe she was acting? Or has she really forgotten her Polish?

So when I heard of the “How does your Polish change when you are an immigrant” project, which is looking at  what is happening to your first language when you use your additional language intensively and at what happens in your brain when you “forget” your mother tongue, I eagerly volunteered to participate.

I have lived in the UK for 24 years, I use both English and Polish at work and at home. I regularly visit Poland, I read literature in Polish and in English,  and I think I have a good command of both languages.

The testing of my brain took place in Edinburgh (an extra bonus as I had chosen to go there during the Edinburgh Fringe Festival, which was fabulous). Agata, a member of the project team, made me feel very welcome and at ease. She explained every task in advance, answered all my questions and even offered me a choice of the colour of the very fetching EEG head gear with attached electrodes for tracking my brain’s electric activity. My eye movement was also measured when I named objects in both languages, read sentences in Polish and assessed their grammatical correctness, listened to the recorded sentences and pointed to the mentioned objects. My phonological awareness was also assessed. 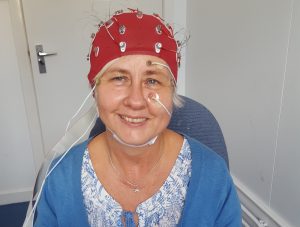 Two visits are required with the first one straight  after my short holiday in Poland – it will be interesting to know if this immersion in Polish had any impact on my results.  The second visit will need to be at least two months after staying in the UK and not being “contaminated” by living in the Polish-speaking environment.

The project is led by Dr. Zofia Wodniecka-Chlipalska of the Jagiellonian University in Krakow, Poland with the assistance of School of Philosophy, Psychology and Language Sciences University of Edinburgh.

I am really looking forward to my second visit later in the year.

More information in English or in Polish